Republicans Have Higher Approval Rating Than Democrats According To Recent Poll Washington, D.C. – Republicans are doing a better job in Congress than Democrats, that’s according to a new Gallup poll. The approval rating for Republicans now stands at 40%, up 6 points from October. Democrats now sit at 35% approval, down from 38%. Of course, none of this is really surprising.

American’s are tired of do-nothing Democrats, who are more interested in their pandering. Gallup notes that Democrats have generally had a higher approval rating, but this is the second time that Republicans have overtaken Democrats according to the Gallup graphic (see below). 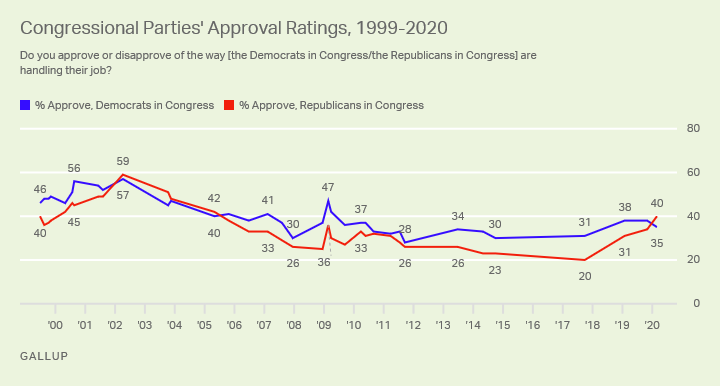 The poll includes dates from February, well before the recent COVID-19 developments. The media and Democrats have been pushing a negative narrative against Republicans from the start. The bump from Impeachment shows for Republicans, but it also shows for President Trump.

In January and February, Trump’s approval rating sits at 49% and his favorability rating sits at 46% according to Gallup. These are some of the best numbers that Trump has had since he took office. President Trump has proven himself as a strong leader amid the impeachment inquiry and trial. This is great news for Trump going into November for reelection.

Sen. Mitt Romney (R-UT) is now viewed more favorably by Democrats than Republicans. Romney broke with Republicans to support impeachment of President Trump and has had many other questionable situations since. It now sits at 23% among Republicans and 56% among Democrats. Here’s the graphic from Gallup that shows the changes.

The poll contains great news for Republicans and concerning for Democrats. Republicans are targeting a takeover of the House and feel their chances are good. Republicans also need key holds in the Senate to maintain the majority there. This poll certainly goes a long way to help ease those concerns, but is by no means a guarantee of November.