Hidden danger of a Nuclear Weapon

Electromagnetic pulses, or EMPs, are caused by nuclear explosions, and electronics can be disrupted or destroyed by an EMP from miles away. A nuclear explosion produces a brilliant (and burning) flash of light, a building-toppling blast wave, an incendiary fireball, and radioactive fallout that can travel hundreds of kilometers.

An electromagnetic pulse, or EMP, is a lesser-known consequence of a nuclear explosion that can dramatically expand its damage zone.

EMPs are brief bursts of electromagnetic radiation that are undetectable to the naked eye. They occur naturally, most commonly during lightning strikes, and can cause damage to surrounding devices.

According to US government assessments, nuclear EMPs can cover a whole continent and disable tiny circuits inside modern devices on a global scale if a detonation is large and high enough. The electricity grid, phone and internet lines, and other metal-based infrastructure may be vulnerable to the impacts, which are similar to those of a catastrophic geomagnetic storm.

Instead, Brooke Buddemeier, a radiation expert at Lawrence Livermore National Laboratory, suggested hiding deep inside a structure and listening to instructions on a radio. In response, a reader pointed out that the bomb’s EMP will “essentially destroy” “radios, computers, and anything else that uses electrical transmission to operate itself.”

This could be true – but only in extremely particular and unusual circumstances.

What is the mechanism of an electromagnetic pulse?

Now we are speaking of effects well beyond the obvious physical effects of the blast, as seen below. 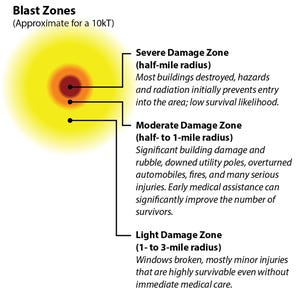 The first is a nuclear weapon’s inaudible blast of gamma rays, a type of light released by the universe’s “hottest and most energetic things,” according to NASA. Gamma rays account for a minor percentage of a bomb’s energy yield, between 0.1 and 0.5 percent. These collide with air molecules, knocking off electrons and accelerating negatively charged particles to nearly the speed of light.

In a corkscrew-like pattern, Earth’s magnetic field then shuttles many of these high-speed electrons toward the planet’s poles. The electrons react to this movement by releasing their newly acquired energy in the form of a strong soup of electromagnetic radiation, which includes radio waves.

According to an unclassified 1977 paper from the Departments of Defense and Energy, “the radiation can be collected by metallic and other conductors at a distance, just as radio waves are picked up by antennas.”

“The energy from the EMP is received in such a very short time, however, that it produces a strong electric current which could damage the equipment,” it said. “An equal amount of energy spread over a long period of time, as in conventional radio reception, would have no harmful effect.“

EMP can “capture” this very powerful pulse when it travels through metal devices such as a phone, computer, or radio. This can cause a rogue current of electricity to flow through the tiny circuits of modern devices, disrupting or even destroying them. Meanwhile, the excess current can cause power transmission or telecommunications equipment to overload, ignite, and fail over kilometers.

If you’ve ever used a microwave oven and noticed your phone’s Wi-Fi or Bluetooth connection drop out for a brief moment, you’ve experienced disruptive electromagnetic waves — and gotten a taste of what an EMP may do.

A nuclear detonation’s EMP has a magnitude of 30,000 to 50,000 volts per meter, which is thousands of times stronger than the one emitted by your microwave.

Fortunately, when it comes to EMP, not all nuclear explosions are made equal-because  altitude is important.

Nuclear detonations hundreds or thousands of kilometers above the Earth could have far more destructive implications than those that occur on the ground.

At a high altitude, gamma rays can spread out more easily, hitting several upper-atmosphere air molecules at once. Because air has a low density, electrons can flow more easily, increasing the intensity of an EMP.

According to a 2008 analysis by the EMP Commission, the appropriate nuclear bomb detonated at the correct altitude could bathe the entire continental US in EMP, causing “catastrophic” disruption of telecommunications and electrical grid infrastructure.

Data processing systems, communications systems, displays, industrial control applications, such as road and rail signaling, and computers incorporated in military equipment, such as signal processors, electronic flight controls, and digital engine control systems, are all susceptible to the EMP effect.

The EMP effect may also destroy other electronic gadgets and electrical equipment. Due to the presence of long copper connections between devices, telecommunications equipment can be extremely vulnerable.

EMP is particularly dangerous to receivers of all kinds, because the highly sensitive microscopic high frequency transistors and diodes in such equipment are easily destroyed by high voltage electrical transients.

As a result, radar and electronic warfare equipment, satellite, microwave, UHF, VHF, HF, and low band communications equipment, as well as television equipment, are all on the list.

Some physicists and weapons experts are skeptical about this revelation, and the EMP danger posed by some countries, such as North Korea, is deemed “crazy and comical.”

Nonetheless, nuclear EMP is a serious threat. However, if the explosion happened close to the ground, many of the gamma rays would slam into the ground. Those beams would struggle to build a strong enough electric field to cause widespread EMP. Also, the increased density of air would be ineffective.

According to experts, “the size and direction of your device, the construction of the building you are in, plug-in or battery, if it is behind a surge protector,” and other factors all have a role in whether or not an EMP affects electronics.

Because many radios have less sensitive circuitry than phones, they’re likely to be the initial line of communication following a ground bomb.

“Even within a few miles of the event, there is a fair likelihood that there will be plenty of working radios, and that radio transmission towers outside of the impacted area will still be able to relay information on the safest plan for keeping you and your family safe.”